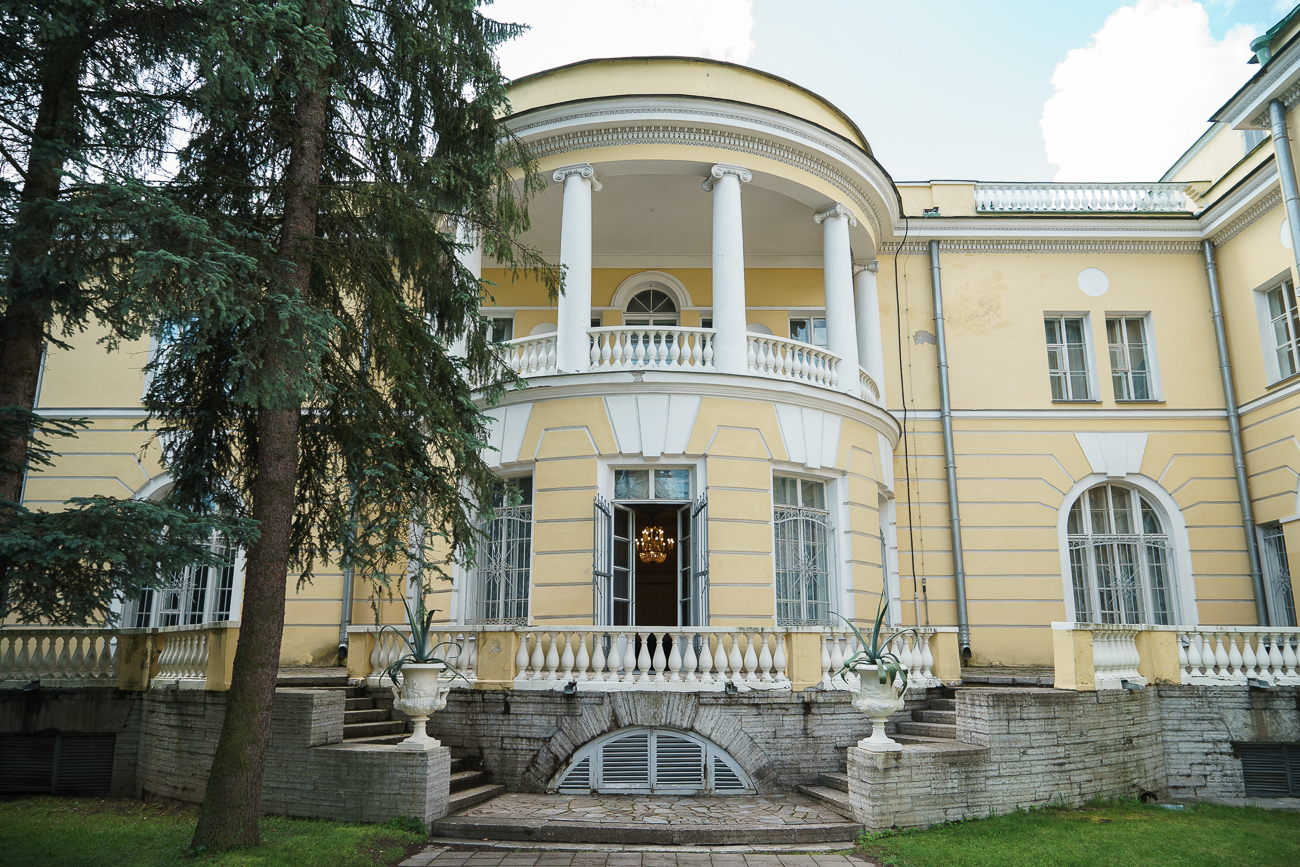 In 4 Radischeva Str. (former Veliovskaya Str.) in Tsarskoye Selo there is not a large building known as a former summer mansion of St.Petersburg aristocrat, actual state councillor and master of ceremonies of His Imperial Majesty Vasily P. Kochubey (1868-1940).

Construction of the building started in 1911 and was carried out by architects Alexander I. Tamanian and  Nikolay E. Lanceray. The authors applied the best compositions  of the late 18th and early 19th centuries, developed by architects of classicism. In October 1913 the owner moved in the residence and in winter 1914 the first ball was held there.

It was a real palace in miniature having magnificent facades of monumental neoclassical forms and luxurious interiors with the palace layout. The famous St.Petersburg construction companies, participating in the construction of the house, applieed the cutting-edge technological advances of that day.

The main entrance to the mansion is decorated with a six-pillar Greek Doric portico. Heavy oak doors covered with plates of dark bog oak and having decorative fancy carvings on their leaves discover the secrets of the interiors of the house. 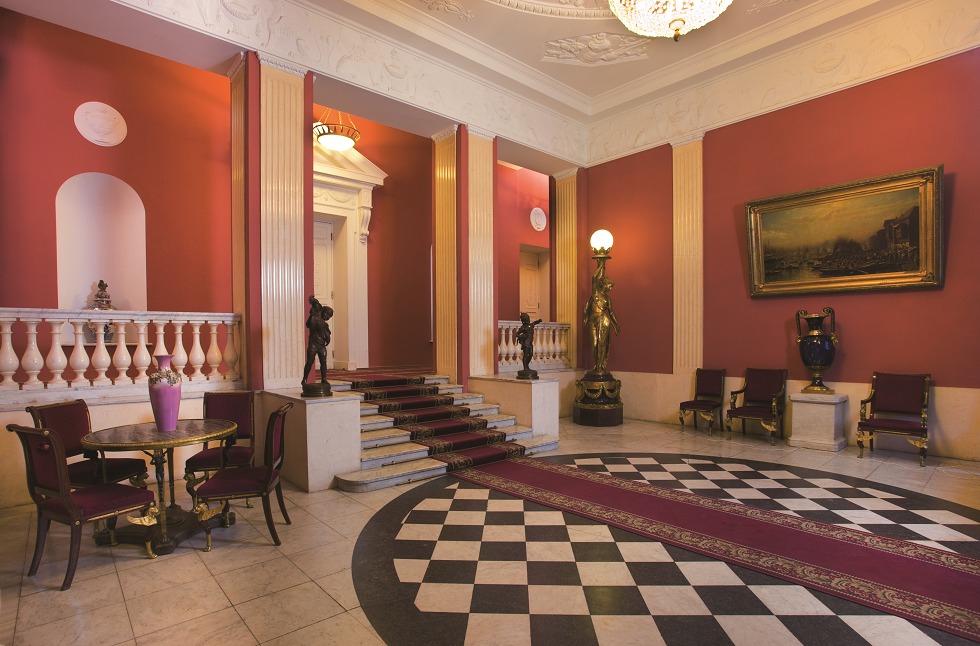 The front hall is decorated in the Romanesque style. There is thick dark pink color plaster on the walls.The walls are decorated with fluted strip-plasters of light yellow  artificial marble,  white transparentalabaster multi-figure friso depicts Cameron’s incense-burners surrounded by griffons, and the door fancy carvings are covered with antique rosettes and stylized vine leaves. Everything here resembles traditional interior of palaces of rich ancient Rome citizens – in particular, the color combination of materials, the symbolic significance of decorative ornaments. The floor is paved with black and white marble slabs arranged chess-board style in the central circle. Here silence reigns at night. And only a gilded bronze figure of the Goddess with the lamp held high in her hand illuminates the small space of the hall with the ghostly light. The ancients used to say: "When the twilight descends on the earth with magically transparent veil, then another life begins – the life of the stone".

Vasily P. Kochubey received an excellent education at St.Petersburg University and was a passionate collector of works of art of Russian and Western European masters, minerals and books. His library was a unique collection of works on the history of Ancient Rus and Early Middle Ages, the history of architecture, rare monographs and manuscripts.

The collection and special armor-room safe kept numerous works of art which have been moved from his home in St. Petersburg on 69 the Moika River Emb.Many pieces of furniture, paintings, sculpture, manuscripts, books from the collection of Vasily P. Kochubey exhibited at exhibitions in St.Petersburg.For example, in 1914 a rare French manuscript, decorated with colorful miniatures, as well as the publication of the XVI century from his library were demonstrated at the exhibition of Russian and foreign books of the XV-XIX centuries.Vasily P. Kochubey immortalized the interiors with stylish furnishings and unique furniture in numerous photographs, arranged for this purpose a special room, the photo-shop. Many of the photographs of the interiors of the mansion are saved in the collections of the Kochubey family in the State Archives of the Russian Federation.

The White Marble Hall of the mansion was used for ceremonial receptions. Its interior is built on ancient motifs. The hall is devided by marble columns into three separate and at the same time connected with each other spaces – the same way the space of the hall was devided by columns during the reception in ancient Rome to create an atmosphere of "interest groups". 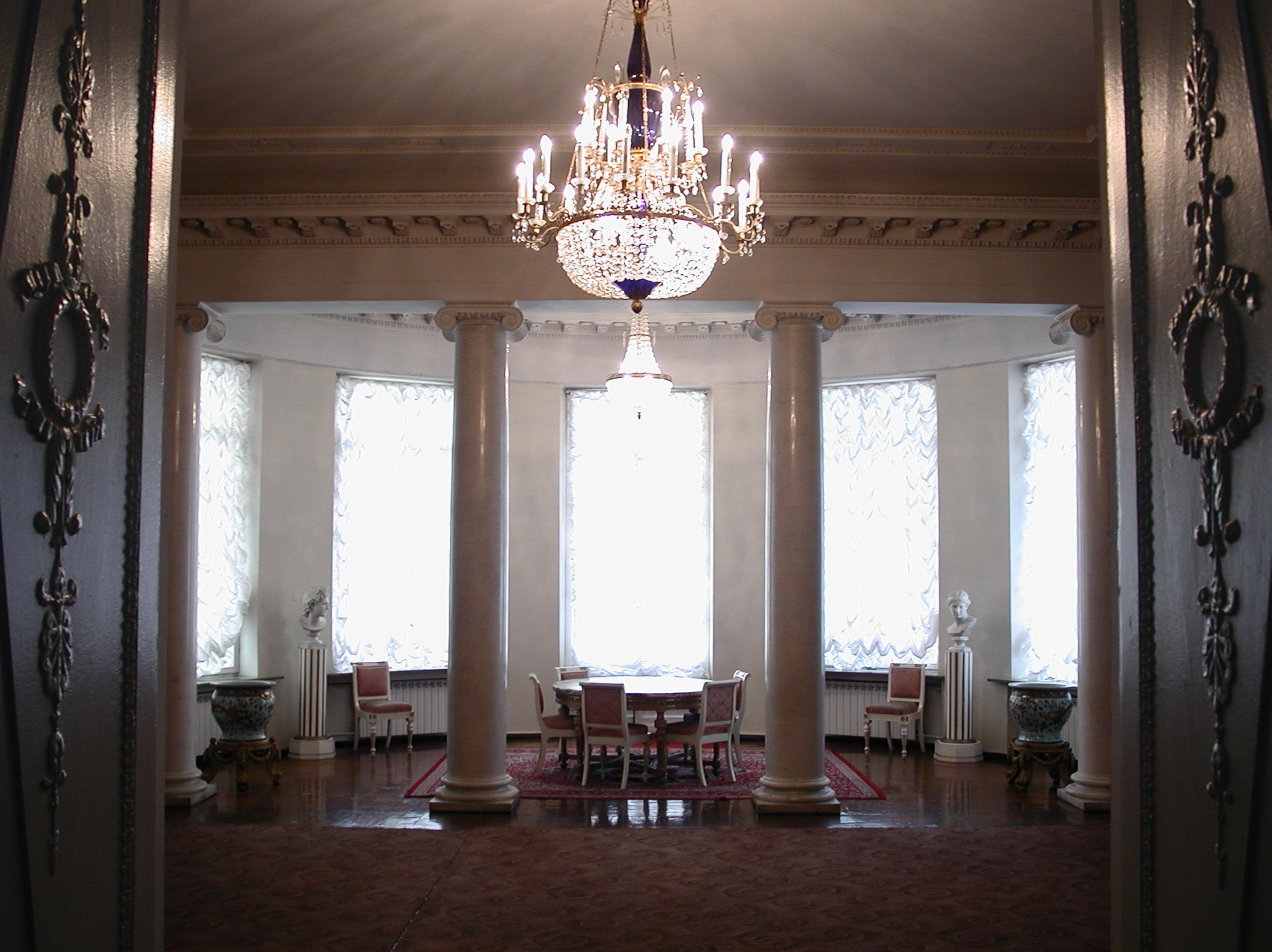 Nikolay E. Lanceray decorated the Hunting hall with the inclusion of the Early Middle Ages motives.The ceiling is covered with decorative beams made of iron-concrete structures, covered with platesof dark bog oak with special mastics.The panels of the hall are covered with the same plates.The furniture is made of oak wood and inlaid with walnut plates by masters of the Imperial furniture manufactories in Helsingfors upon the drawings of Nikolay E. Lanceray.Meissen, Sevres and Chinese porcelains are stored behind the thick crystal glasses of cupboards, cabinets and slides.However, in the day of Vasily P. Kochubey the guests were hosted only with his Russian imperial porcelain painted with hunting scenes.People were proud of the domestic manufacturers and a number of times a part of the big family capital was directed at the development of imperial porcelain production. 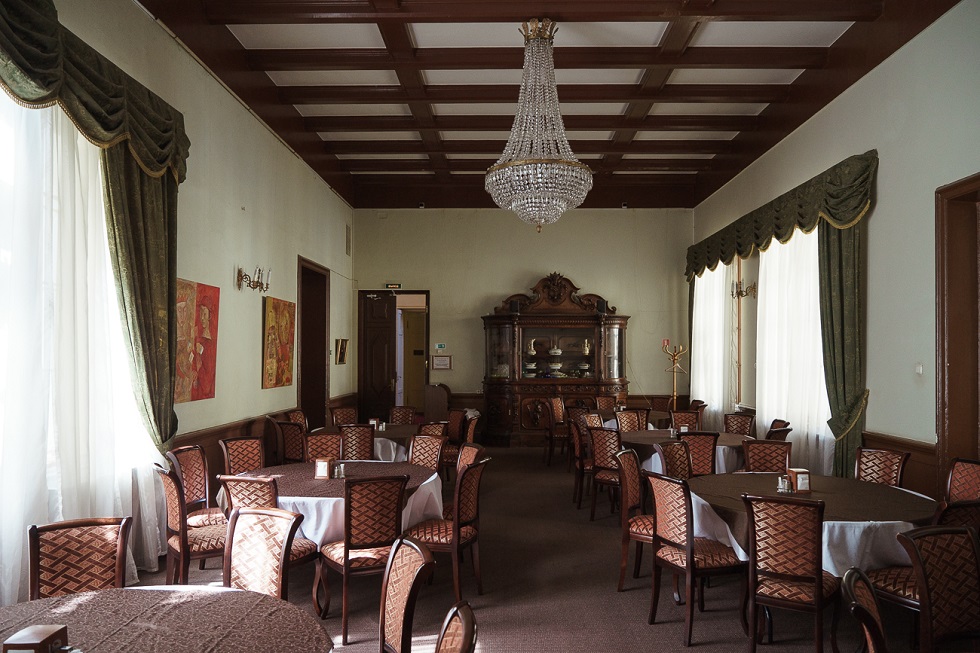 The Pink living room is a small and cozy room, which walls are decorated with light white alabaster ornaments, supported by carved figural compositions. The leaves of the doors are decorated with flower garlands  hanging on the bow with included in these garlands musical instruments. The interior sounds like music that is exuded by stone, and the combination of pink and white creates an illusion of youth and spring. It was a living room for the ladies, shining with beauty and joy, rarely sad and unfortunate, but always shrouded in mysterious mist of romanticism.

The Front Study is business-strict and laconic.The ceiling is decorated with iron-concrete structures, the walls are covered with greenish plaster and furniture (small chairs, armchairs, sofa) has velvet green matter.Once the main place was occupied by the heavy, oak wood desk upholstered in green cloth and the same heavy cabinet furniture in an early modernist style with leather covers. The parade facades of ancestral family fireplace are decorated with enigmatic relief ornaments. At the foot of the fireplace there is a granite slab with the date and the family symbols, which, how mysterious it could seem, does not correspond with the generally accepted historical pedigree of the nobles and dukes of the Kochubeys family as descendants of the Crimean Tatars from the family of Kuchuk-bey. In the study people talked about the state affairs and played billiards. By the way, pool tables of Vasily P. Kochubey were excellent: Russian, six pots, made in St.Petersburg by masters of the famous factory of  Brykalovyh Brothers. Tables are rarities: their bases and a boxes are made of bog oak, table coverings lined with huge Ravenna granite slabs in thicknesses of 4 cm. 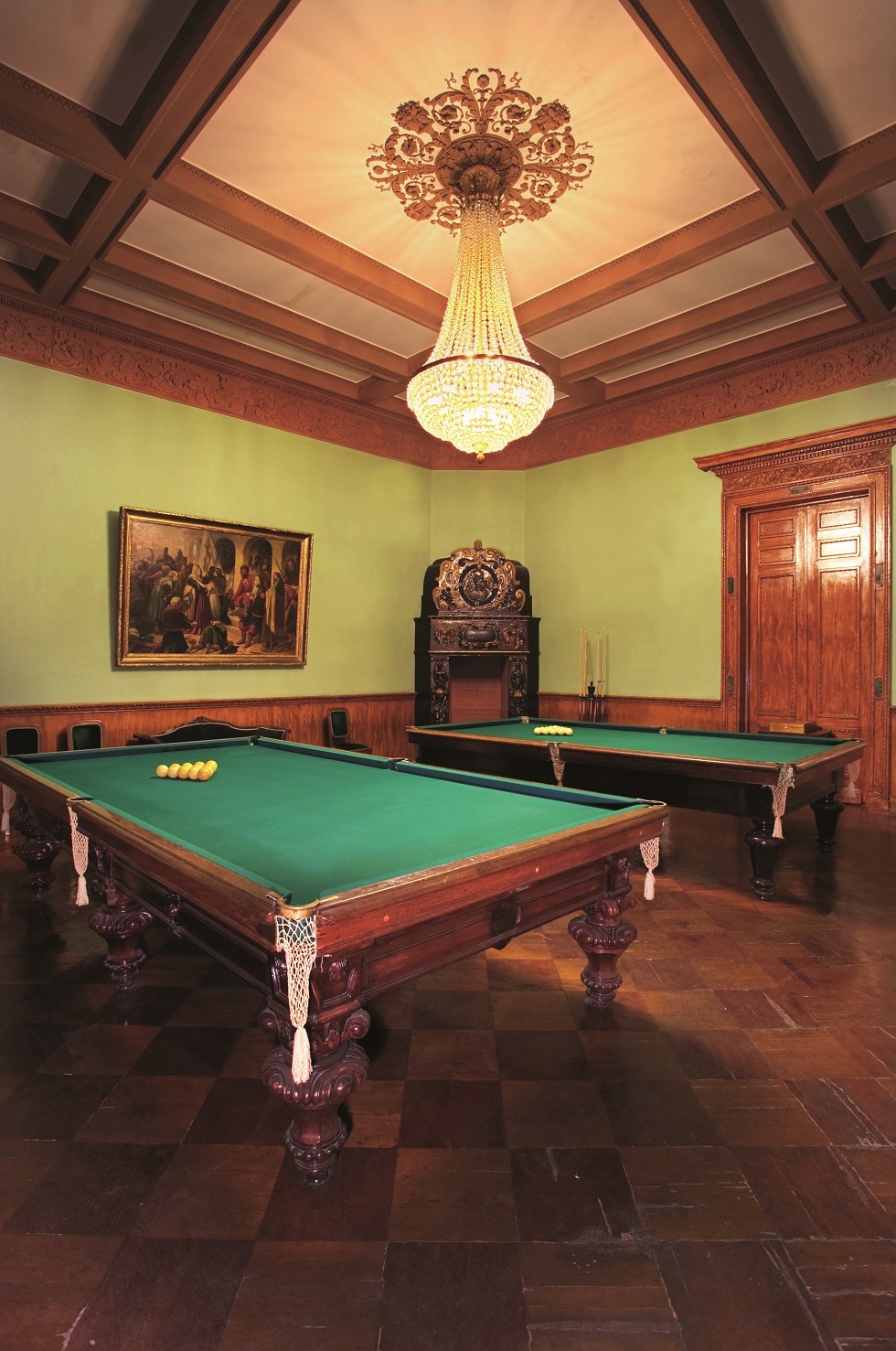 Golden Living room is the pearl of the residence. It is a gift of the duke to his beautiful wife.The interior was created by Nikolay E. Lanceray in the style of ornate neoregency.Each element of this interior decoration is musical – “music, frozen in flirtatious curved lines gilded plaster of medallions in the corners of the pagoda, passing into the smooth plane of walls with well-rounded gilded plaster rectangular frames in the form of a light wave; this playful transparent baroque music sounds among the bright gold shells scattered on the white ceiling; this is the music of wild steppes sweeps over the walls in the living room in the gilded quivers and arrows and golden masks reminiscent of the music of the ancient Roman Saturnalia”. 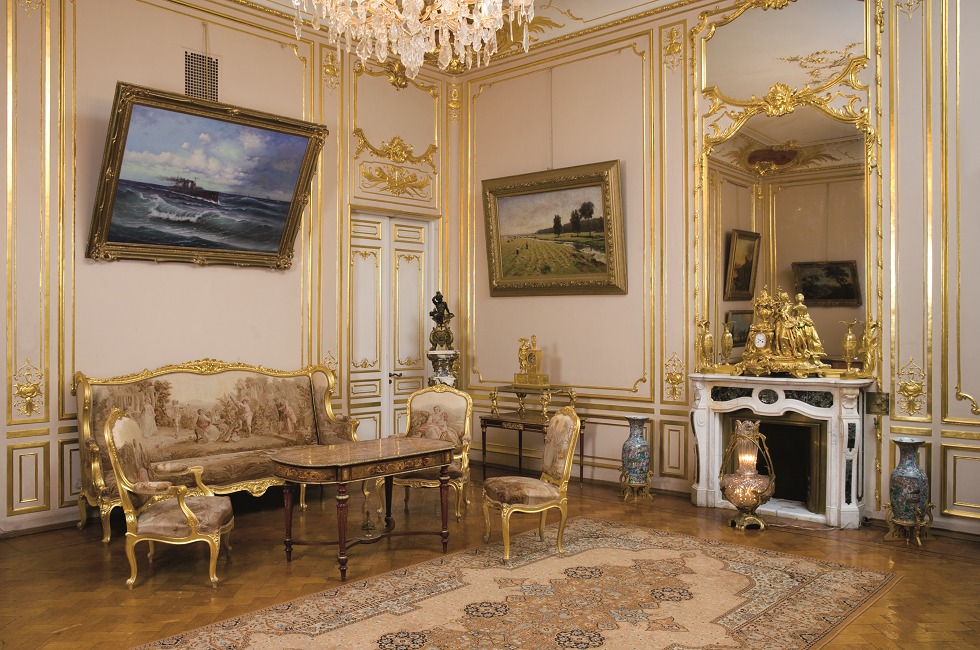 After the revolution the house of Vasily P. Kochubey was nationalized. The unique art collection was deposited at the Paley Palace, where other nationalized private collections spread after the 1930s among various museums and stores of the country were stored. In 1918 the mansion was transferred to the People's Commissariat, and in 1926 went under the jurisdiction of the People's Commissariat of Social Security. In 1927-1940 it was the House of the old Bolsheviks and veterans of the Russian revolutionary movement. In 1940 there was a military hospital. During the occupation of Pushkin by the Nazis the residence was used for the Gestapo commandant. After the liberation of the town the building was used as the recriation center for workers of the Leningrad Regional Committee of the CPSU. The museum objects, corresponding to the style of buildings which can be seen now were selected from different places.

In 2012, the Management Training Center became a part of the National Research University Higher School of Economics.

Have you spotted a typo?
Highlight it, click Ctrl+Enter and send us a message. Thank you for your help!
To be used only for spelling or punctuation mistakes.